The dramatic disclosures of Julian Assange, through his publication on the Internet of diplomatic documents, have made him a person of great interest. He is admired by a large section of the public and feared by Governments who much prefer to keep their procedures well hidden. The USA, in particular, has dubbed Assange an Internet terrorist and they seek his arrest. The practices of the Western World in dealing with its enemies are as shameful as any ascribed to their counterparts in the East. This has come as a shocking revelation to the great majority of ordinary citizens who abhor violence and cruelty.

We are indebted to Mary Plumb who wrote in The Mountain Astrologer on December 7, 2010, that the birth time of Julian Assange was received from an anonymous but authentic source who had viewed the Birth Registry and the appended Birth Certificate. The hour was not on the Certificate but was on the record in the Registry files. Because of ink that was a bit smeared, there is a question of whether the time of birth was 2:05 pm, 2:06 pm or 2:08 pm on July 3, 1971, in Townsville, Queensland, Australia.

Which is the correct time is a matter that can be surely and quickly determined by using the marvellous modern technique known as Age-Harmonics. The procedure is to set a Natal Chart for each of the three birth times and derive from each one the Age-Harmonic Chart for a notable event in the life of Julian Assange. Whichever of these three subsidiary Charts reflects the event is the one founded on the correct Birth time. 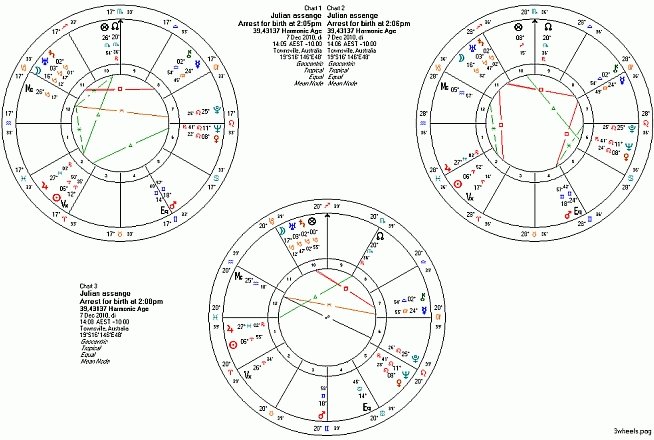 Pluto opposing the Floating Mc in Chart 3, drawn from birth time 2:08 pm, is a striking illustration of Pluto (coercive power) interrupting the life and activities of the native. The Vertex trine to Pluto adds to its force and effectiveness.

Hence 2:08 pm is the correct birth time of Assange.

Read more about Assange on the next page >