The differences between January 31st and April 30

From a vedic astrological perspective by  C. Kaspers.

eatrix made the announcement of her abdication and the accession to the throne of her son Prince Willem Alexander, on January 28th 2013. Three days befóre the estimated January 31st 2013. However, the coronation will take place at April 30th, three months later! Was it possible to get a more accurate prediction using the various astrological techniques? The Western primary and secondary Directions appear barely to indicate difference between the two dates. How you can make the distinction between them with the use of Age Harmonics you can read here.

Another technique that enables you to do very delicate predictions is Vedic Astrology.  Christine Kaspers works with the Mutual Agenda and in her analysis she shows how to distinguish the difference between the two data with the help of that technique.

In Vedic Astrolgy, in order to estimate what future awaits, you will have to deal with Dashas This means that every period of life, is under the domination of a planet : the Period Ruler. Such a period is called a Maha Dasha and has a duration of 6-20 years. The Maha Dasha is subdivided into a Buhkti Dasha (duration 3 months-3 years) and Antara Dashas which can last several days to weeks.

Another distinct feature of Indian Astrology is the use of auxiliary Horoscopes or Varga's. It are harmonics (not to be confused with Age Harmonics!) who are very sensitive to the smallest changes in a time of birth. Having an exact time of birth is of great importance. The way the Varga is calculated is equally important: a slight difference in birth time or in calculation method can result in a different Varga.

Initially that seemed the case with the D10 or Dasamsha of Queen Beatrix. Different computer programs yielded a different Ascendant in the D10 (Gemini or Cancer). Christine and I then decided to grab a pen and paper and calculate it ourselves. Independently of one another we arrived at the same result: a Cancer Ascendant for the D10. This Varga is the starting point of the analysis.

The totality of Period Rulers,Karakas,Transits from the Ascendant and or Moon in relavant (derived) Houses in connection with the rashi and the concerning Varga (in this case the Dasmasha), gives information about the expected event. It's complicated, but ... practice makes perfect!

Below follows the rashi of Queen Beatrix with subsequent the Dasamsha (South Indian model). The Trans-Saturnian Planets are in the chart, but are not included in the analysis. 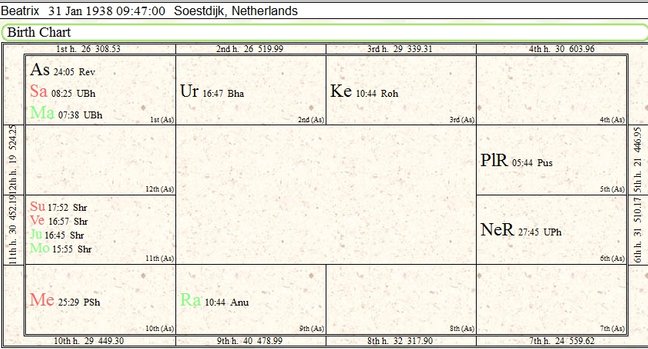 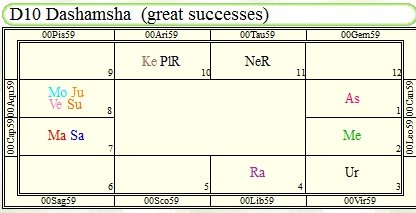 As to the relationship between the Rashi and the Period Rulers, you see:

in the 10th House from the Lagna (= Ascendant)

in the 12th House from Karaka of kingship: the Sun

Mercury has an agenda for abdication

Mars is in the 3rd Huis from Karaka Sun: statement concerning kingship

Mars in 1st Hous conjunct Saturn, Ruler of the 12th House of withdrawal and Karaka of "endings"

The same Period Rulers in relationship to the D10 show the following:

Rahu is in 12th from Mahadasha Lord Mercury

The Sun is also Ruler of the 10th from the Bukhti Lord that you can therefor also combine with Venus, Ruler of the 8th

The differences are not overwhelming, but it is clear to see that Mars, the Karaka of the 3rd House plays a part on January 31st (resp. Januari 28th). Thus that day the emphasis is also on the anouncement of her abdication. On April 30th (Mars doesn't play a role as a Period Ruler) refers only to her abdication from the throne and the change of power.

Let's see what we can learn from Prince Willem Alexander's chart.