The presidential elections of November 6th , 2012

an approach based on Vedic astrology and the application of the 'mutual agenda' by C. Kaspers.

In Vedic astrology someone's life is cut in rather long periods of time and for every period there is 1 planet colouring this period. Such a period can vary from 6 to 20 years. Of course a lot of different things are happening during that period and it's obvious that all these things never can depend on only 1 planet, sitting on the throne. That's why there is next to the throne from the king a second chair, which is occupied by another planet who mostly colours this period for several years as well. After some years there is again another planet sitting on the 2nd chair. And just like this there is a 3rd chair, a 4th and a 5th.

The 1st planet occupies the throne quite long, the 2nd shorter, the 3rd shorter again, the 4th shorter than the 3rd and the 5th most of the time only 1 or 2 days. If all these 5 planets point in the same direction, one can expect things are going to happen. We call this the mutual agenda.

Very important in Vedic astrology is the dignity of the planets, which can vary from very bad to very good and everything in between. If the planet on the throne or a chair doesn't have much dignity in a specific chart, this doesn't mean everything will be nasty as long as this planet is sitting on a chair. It means there will be more stress or troubles to achieve what the planet promises.

Hereafter I compare the charts of Mitt Romney and Barack Obama. I also use a specific Varga, the Dasamsha, which has to do with profession. A Varga is derived from the birth chart and provides you with information concerning specific themes. 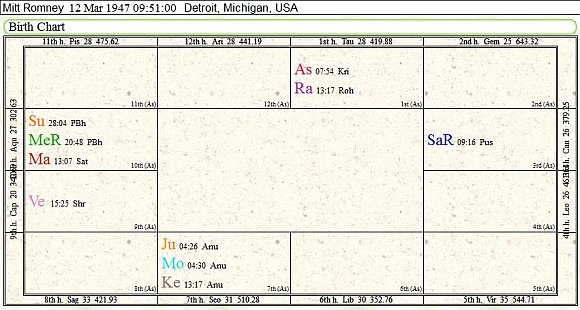 - The 1st planet (occupying the throne), the Sun is sitting in an appropriate house (the 10th for occupation and significator for success), but the Sun has bad dignity. That doesn't mean that Romney has no chance at all to win the election, but there will be a lot of stress and troubles around it. His Sun is conjunct Mercury (because the Sun is activated Mercury is activated), but Mercury too has bad dignity, although Mercury also can bring good things because of being retrograde.

There is another conjunction from the Sun with Mars, ruler of the 7th.

- The planet next to the Sun on the 2nd chair is Mercury.

Mercury is in the 10th house from the Ascendant: which is appropriate! But we already noticed Mercury hasn't much dignity: an agenda, yes, but a nasty one.

- The 3rd planet next to the Sun is Rahu.

Rahu is not in an appropriate house, nor in the rashi, nor in a derived house which relates to the 10th. To find out how the north node will act out, we will have to look at her in two different ways:

1st: Rahu is said to act like Saturn, because Rahu is always causing some problems just like Saturn. Saturn is dispositor of the Sun, who has to do with success and is sitting on the throne.

2nd: we look at the node's dispositor. Rahu's dispositor is Venus and Venus doesn't have a mutual agenda for Romney.

Both planets don't have good dignity, so there is an agenda, but a nasty one

- The 4th planet that day is Saturn. Again: there is an agenda but a nasty one

- The 5th planet that day is Venus :Venus doesn't have an agenda 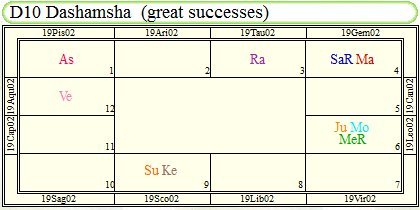 Sun on the throne is in this Varga neutral and not in an appropriate house. And conjuncts Ketu (south node) which is not good for winning. As a matter of fact you needn't to look any further. The neutral Sun and the conjunction with Ketu can only lead to one conclusion …..

For the sake of the procedure I will finish the analysis:

-The 2nd planet, Mercury, has good dignity in this Varga and is ruling the 7th, the 10th from the 10th and - so has an agenda

-The 3rd planet is Rahu, acting like his dispositor Venus (in the Varga) and Venus is in the 12th. Guess… Rahu is also acting like Saturn and Saturn is ruler of the 12th

-The 4th planet is Saturn, ruler of the 12th

-The 5th planet is Venus having no agenda at all