Assange has been held on bail in London pending the decision of the English Court whether or not to accede to Sweden's wish to extradite him to answer charges of raping two Swedish women. Assange strenuously denies rape and claims it was consenting union.

The case was heard on 12 July 2011 and judgement made against Assange. It is not surprising that the Court ruled against him as on that date his converse Progressed Moon opposed his Natal Jupiter, effectively denying him any success of a legal nature. Assange's Appeal against the decision has been postponed. He believes that from Sweden he may be extradited to the US where he is regarded as a technical terrorist because of his publication to the World of their diplomatic reports. Assange is justifiably apprehensive of the treatment he may receive at the hands of the American CIA.

In the rest of 2011 and the first few months of 2012, Assange's Progressions and Directions are more challenging than conducive to success in maintaining his freedom and doing what he wants to do.

This is demonstrated powerfully by the recent news (27th October) that Wikileaks has stopped publication due to running low on funds contributed by well-wishers following a banking blockade placed on the site by Visa, Mastercard and PayPal. Assange claims that the blockade is "completely outrageous …it is not an attack on Wikileaks itself, it is an attack on free speech without any legal justification”. This banking blockade accords with Assange’s current Ascendant-Arc Direction of Mercury square Natal Saturn . Mercury rules the 8th House (money from others) and Saturn is of course the block.

From March onwards his situation gets more serious, culminating in July 2012 when Uranus is Stationed square to his Natal Sun. 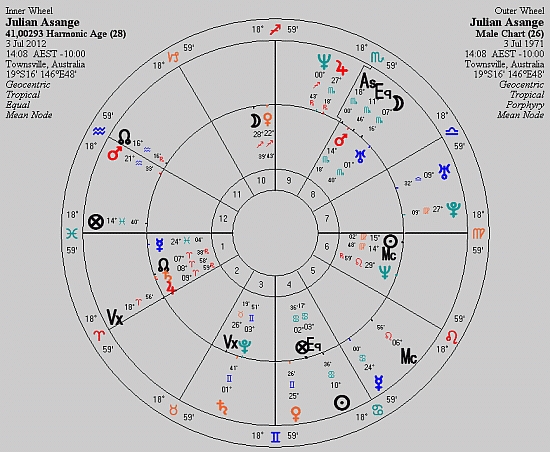 Above is the Age Harmonic 41.00293 for the month of July 2012, surrounded by the Natal Chart (2:08 pm). The 9th House (Legal Procedures) is emphasized by the occupancy of many Significators and particularly by the Natal Ascendant being almost identical with the Harmonic 9th Cusp. Assange is being engaged in a legal struggle. Important adverse indications in this BiWheel testify to his losing the struggle:

It will be a miracle if Assange survives July 2012 unscathed, and also unfortunately, a defeat of the public's right to know the truth.

The predictions Dymock made have been fulfilled.

Assange is at present (December 2013) sheltering in the Ecuadorean Embassy, London, where he claimed asylum on 20th June 2012 as a political refugee.Asylum was granted on 16th August 2012 .

< to the first part of this article